I will. Really I will.

I am a procrastinator who hates deadlines.

Not a procrastinator who pulls her digit out when the deadline looms.

Not a high achiever who hates deadline but doesn't need to worry about them
because she finished that project yonks ago.

Adding to that, sewing has also taken a backseat to my knitting obsession.

So when Cam over at CurlyPops had a month-long skirt sew-a-long
a few months back,
it wasn't really likely that I was going to get over the line.

Even though it was a reeeeeallly simple skirt.

Even though the sew-a-long got extended
and I had another whole month to get it done.

See that green fabric right at the bottom, somewhat buried by life?
That's the skirt pieces,
pretty much where they have been for about 6 months now.
Progressively disappearing from sight.

So now Cam is hosting a bag adventure.

I am a sucker for bags.
Apparently, because I buy and make them,
I already have more than I need
(in the world according to Mr Boozle)

I don't have a cute, trendy, functional bag that will keep my hands free
as I scramble around the Grand Canyon
or play blackjack at Las Vegas
or hang on for dear life on a ride at Disneyland,
now do I?

Cam, I reckon this time I will do you proud.
Just off to think about that deadline for a little while first...can't rush these things, you know. 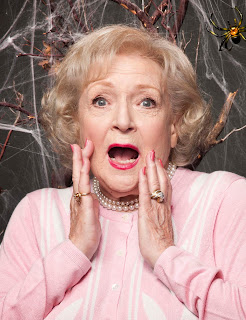 The scandal over Ernie and Bert sharing a bedrooom
(and don't get me started on best mates, Noddy and Big Ears)

An Australian shopping centre chain trying to ban their Australian Santas from saying "ho, ho, ho"
in case they offend women due to the American slang use of the word.

I could go on but everyone has their own examples.

At the moment, my daughter talks about her friend with black skin.
She says it because she is five and her friend has black skin.
There is no underlying agenda or any offense intended.
She is a little kid.
But I squirm when she says it
and I resist the urge to clamp my hand over her mouth
and I am waiting for the PC police to come knocking at our door.
I find myself trying to explain to her why people might not like her using those words.
Geeze. She is five.
Can't she just be a little girl for a while longer?

I was never a Golden Girls fan
but I think that I fell in love with Betty White
when she starred in the Snickers commercial in 2010
in her late 80s.
(No, not THE late 80s; HER late 80s)

So what would Betty say?

Well, what she has said is this:

"I don't care who anybody sleeps with. If a couple has been together all that time — and there are gay relationships that are more solid than some heterosexual ones — I think it's fine if they want to get married. I don't know how people can get so anti-something. Mind your own business, take care of your affairs, and don't worry about other people so much."

"I think that we're losing our sense of humour instead of being able to relax
and laugh at ourselves.I don't care whether it's ethnicity, age, sexual orientation
or whose ox is being gored"

But best of all, she said this:

“Why do people say "grow some balls"? Balls are weak and sensitive. If you wanna be tough, grow a vagina. Those things can take a pounding.”

As long as Betty Whites are around,
hopefully we wont take ourselves so seriously.
Posted by Tas at 2:35 PM 7 comments:

The start of something new

She danced around the house yesterday in anticipation,
she couldn't get dressed in her uniform fast enough this morning
and she asked us to carry her oh-soooo-heavy back pack to school for her.

I have been looking forward to this stage of our lives.

I have been a burnt out mum for a while.
I have been dreaming of regular, child-free time.
I have been thinking about a few goals, seemingly forever but at least 9 years, on the back-burner.

Most importantly, I am believing that I will be a better parent for the break that I will get each day
and that the time that I spend with my kids now
will be more valued and better quality.
That might sound cliched or corny
but I am hoping that it is true.

This morning, she was confident, enthusiastic and ready for her school days to start.
And so were we.

*disclaimer-Of course, this is only day one
so I am not completely ruling out a melt-down happening at some stage.

...We have been enjoying Miniscule.
My absolute favourite is the outdoor spider with the long legs
but I really want to squish that wretched, irritating ladybird...

...The Boy in the Striped Pyjamas
broke my heart...

...We booked our first Vegas show for our suddenly-not-so-far-away USA holiday...

...I remembered when Tom Cruise's first marriage ended
and I thought (as a single 21 year old) "Yay"
(a purely youthful and hormonal response)

Now that his third marriage has ended
I am thinking (as a judgemental, harsh 43 year old) "Care?"
(Don't get me wrong- it is a shame, especially there is a child involved
but really I have never felt the same about Tom since he jumped all over Oprah's couch
and dissed Brooke Shields for taking medication to help with her post-natal depression)

(As an aside, it is interesting to note
that each of Tom's marriages have ended when his wives were 33.
Scientology conspiracy theory anyone?)

...it has been about knitting hats
for cold winter days...

...My 7 year old roped me into being his partner for a little 1000 piece puzzle
for the weekend...
then more or less disappeared...
apart from turning up to announce what a great job we were doing...
Lucky that I love him.