The Wicked Witch of the West
couldn't have said it better if she'd tried.

The UN announced that little old Adelaide, South Australia, Australia
would today be the hottest city in the world.

We didn't reach our expected high of 46 degrees Celsius.
(that's114.8 degrees Farenheit
if you are reading this in America, Belize or Jamaica)

(Let's be honest, anything over 40 is just bloody hot,
so what's a few degrees amongst heat-stroked friends?)

Tomorrow will be our 5th consecutive day over 40 degrees.

We South Australians aren't suffering alone.
A lot of areas of Australia are fighting this heat
and the associated fallout.

I have been in Adelaide for 20 years now but
I grew up in Tasmania.
During my childhood, high 20s was a scorcher
and air conditioners were unheard of.
Last year they recorded nearly 42 degrees.

If it isn't global warming,
the predictions that our heatwaves will be hotter and longer
certainly make it feel that way.

Stay cool, everyone.
This (heatwave) too shall pass.

Parents would earn more badges than the best Scout in the world.


Imagine if, when you left the hospital with your first newly-born child,
precious little parcel in one arm,
amongst the nappy and baby shampoo samples, 59 teddy bears and bub's umbilical cord clip in your bag
was a shirt.

A really nice, brand new shirt, in your favourite colour,
a blank canvas front and back.

Imagine if, each time between that time
and the moment when that child,
as an independent-yet-still-living-at-home-just-turned-eighteen year old,
grabbed the car keys at 8pm on a Saturday night and said
"See ya when I see ya",
you received a badge for each achievement as a parent.

Eighteen years after leaving hospital as a first time parent,
that shirt, along with some very old, curdled milk marks on the shoulder
is covered,
smothered,
limp under the weight of those badges.
(Eat your hearts out, you Scouts.
You can't compete with a parent)

The front and back are covered in them.

All the milestones of a parent.

And, on each sleeve, the ooh-aah special ones.
Those badges you get because, as a parent,
you have done that extra little bit for your child
or have had to deal with particularly difficult circumstances.

I know that the time that I had to deal with toddler's poo in aisle three
of the local hardware store
would have been much easier to bear had I known that I was going to get a badge for it.

(OK That's a lie. It was messy and hideous and possibly mortifying at the time
and no bloody badge would have made it anything but unpleasant)

That third bout of mastitis would have been so much less excruciating
if I had just had a badge to look forward to.

(OK That's also a lie. It was foul and excruciating
and I'd much rather have the antibiotics than a friggin' badge)

We are currently working on our " Unswallowing" badge
(OK...yeah....the cleaning up your kids' vomit badge)

Obviously as parents with 25 years of "children time" under our belt,
we are not new to vomiting.

But we want to go for the advanced vomiting badge.

Want isn't the right word.
No choice in going for this badge.

We are 11 days in to a bout of gastroenteritis that has repeatedly affected everyone
in the house apart from me
(I am claiming that I developed immunity to anything involving
my stomach or intestines last year.)

Now cleaning up someone else's vomit is one of those things
that is hard to stomach
(Oh, that pun was oh, so, so intended)

There should be no expectation in life for anyone other than a parent of a child under the age of
?16 years to have to deal
with another person's upchuck.

Close friends and partners may chose to do so
(which I am thankful for after the way my hens' night ended.
But that's another story involving too much alcohol and very windy roads)
but only parents really have to do so.

(The Parenting with Unconditional Love manual
says so under Point 27: Bodily fluids.)

And, like poo, just because it comes from your offspring,
doesn't make it any less repulsive a task.

In fact, I would argue that vomitus is more repulsive than poo
but that is only my personal opinion
and I am sure that you have your own.

I was interested to see that we, as parents, have passed on the carrot gland to our children.
That is right up there with the evolutionary benefits of wisdom teeth and appendixes
as far as I can tell.

One of the children of the house has an impeccable track record,
having never missed the bucket or the toilet.

Unlike the cats, she does not seem to have a substrate preference for carpets and hallway runners.

One child, however, couldn't get it into a contained space if you put him on the edge of an empty
Olympic sized swimming pool, leant him over and directed him to vomit
in the empty space stretching out before him.

He thinks, after the event, that his knack of spewing
360 degrees is really quite amusing.

So, while we don't have a badge-covered shirt to dangle in his face when his first child arrives,
and an advanced "Vomit cleaning" merit to point to,
we have told him in no uncertain terms that we will be laughing
when it is his turn to earn his Unswallowing badge.

I am pretty sure that there isn't a Scout badge to prepare him for that day.

A new year? Ditch the Brasso.

Approaching midnight on 31st December,
the year is looking a fair bit tarnished and dusty.
I know that for most of us
there are glimpses of beauty and the brilliance that were there at 12:01 am
on the previous 1st January.

But instead of reaching for the dusters and the bicarb
to try and clean it up a bit as we have done through the year,
we get to gently push the jaded, fading year to one side.
We can look back when we want to,
pick it up, inspect the end product,
but meanwhile focus on the shiny, brand new year,
dust-free and full of potential.

2013 had a lot of positives for us
but some of the lows were very low.
Mostly first world problems
(probably the most [over] used catch phrase in 2013 for this family)
but significant all the same.

Aside from severe food poisoning for me
and the effects on the family of a prolongued and very ugly business break-up,
the kids seemed to take the worst of it.

A broken arm, Queen Bees, negligent teachers,
bullies, unresolved emotional issues,...
probably to be expected with 3 kids over the course of a year.

You take it on the chin
and hope/resolve/pray that the new year
will bring an easier year for the young ones.

But when middle child lost a tooth on Christmas Eve,
presenting it to a worn-out parent (that would be me) at the end of a year limping towards its use-by date,
my knee-jerk reaction was to announce
that the Tooth Fairy took Christmas Eve (and Good Friday-
a pre-emptive strike seemed like a good idea at the time) as  a day off.
Obviously, I reasoned with said child,
the risk of getting trampled by the big guy or his reindeer was just too great.

(My brain was pounding along...
seriously-the tooth fairy?-on Christmas Eve?- as well?-
hard enough to get those stockings onto the ends of their beds with their jangly bells-
yes, seemed like a good idea to sew them on at the time-
but we aren't home-where is the food colouring in this place?-
why does our tooth fairy magically change the colour of the water in the glass?-
reckon that idea was started at the start of a year, not the end-
if I tread on Lego in the dark, it'll be ugly-
tired, so tired- surely the Tooth Fairy can catch up tomorrow...)

Other parent, high on the prospect of a new, self-improvement project,
quietly announced after the kids had gone to bed
that there was enough magic for both Santa and the Tooth Fairy
to come on the same night.

OK, so I'm not going to get that "Parenting of the Year" award anytime soon.

But I am going to try my best to keep this new year absolutely luminescent
for as long as I can.
Keep it dusted frequently and with enthusiasm.
Even sprinkle it with fairy dust every now and then.

That is, once I have gotten rid of the head lice and the gastro that partied in this shiny new year
with us. 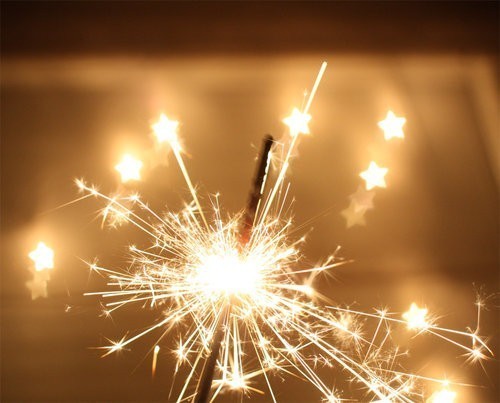